I’ve already given myself a pep talk once this summer about savoring the weeks of looooong hot, humid days, hanging out with the girls with nothing on our schedule. But it would seem I need another reminder. I have so many ideas of how I could use some child-free time! But when I’m longing for a couple hours spent writing at a coffee shop, I’m missing the good that’s right in front of me. So, I’m trying to be present. I’m trying to be grateful.

Today, I’m grateful that the friend who will be living with us soon brought some boxes over this morning and stayed to play with Evangeline for a while. And Zelie took a 4 hour nap (!!!) and I had some unexpected time to tackle a project that’s been on my mind for a couple weeks.

After I won the ABC print from Be A Heart’s Instagram giveaway (I can’t believe it, either!) I kept thinking about how I could use it for some inspo for the shared girls room I needed to create. Figuring out how to layout the room, cut down on toys, and find something that could hold clothes (since the closet would become Zelie’s baby cave and I don’t have a small dresser) took some creative energy, which I enjoyed. But when I have an idea, I want it done yesterday. So my temptation is to be v frustrated when I can’t seem to get going or finish a project day after day because, you know, toddlers and babies. This open window of time today – I think I had nearly 3 hours?? – was such a gift. I just went for it. No levelers, no pencils, I eyeballed it and hammered nails into the walls for the first time since we moved in. I’m pretty happy with it!

The Mary and Jesus etching was a gift from Chris’s brother, Teddy. (Shoutout to Ted’s art skillz!) The plant hanger and the faux taxidermy unicorn are from Target. I know those cacti are doomed, but a girl can dream. And faux taxidermy I just find so adorable and hilarious, it was an impulse buy and NO REGERTS. The photo is me and Chris with Evangeline’s godparents at their wedding reception (Evangeline in my belly), the cross is from a Camaldoli Hermitage in Big Sur, CA, and the embroidery was a gift for Zelie’s baptism made by my amazingly talented friend, Magdalena. 🙂 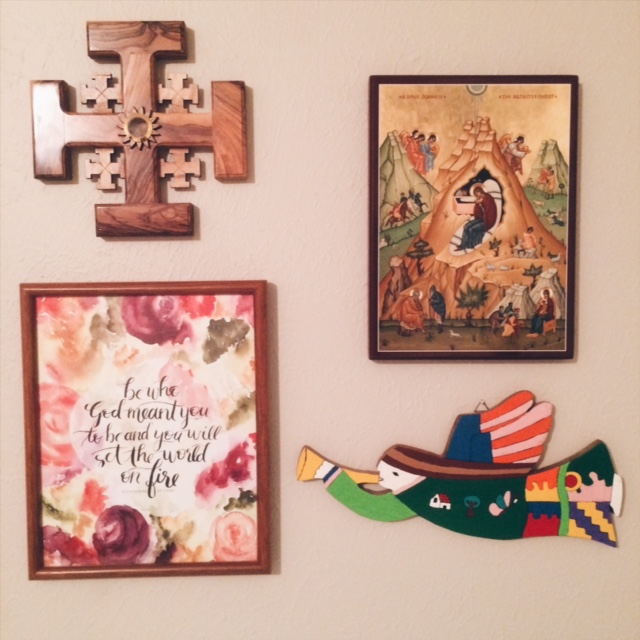 This is over Evangeline’s (new big girl) bed. A shout out to some Etsy shops! The St. Catherine of Siena quote is a Rose Harrington print, a gift for Evangeline’s first baptism anniversary from her godmother, Megan. The adorable St. Teresa of Calcutta doll photobombing down there, also from Aunt Megan! (I love every single saint doll in this shop). And then a Jerusalem cross, also from Aunt Megan – wow! Go, Megan! (And Michael! Sorry, Michael!) – and an icon of the Nativity of Christ, a gift from my good friend Sarah after my confirmation, and a wooden angel that Maya and I had in our room when we were little. 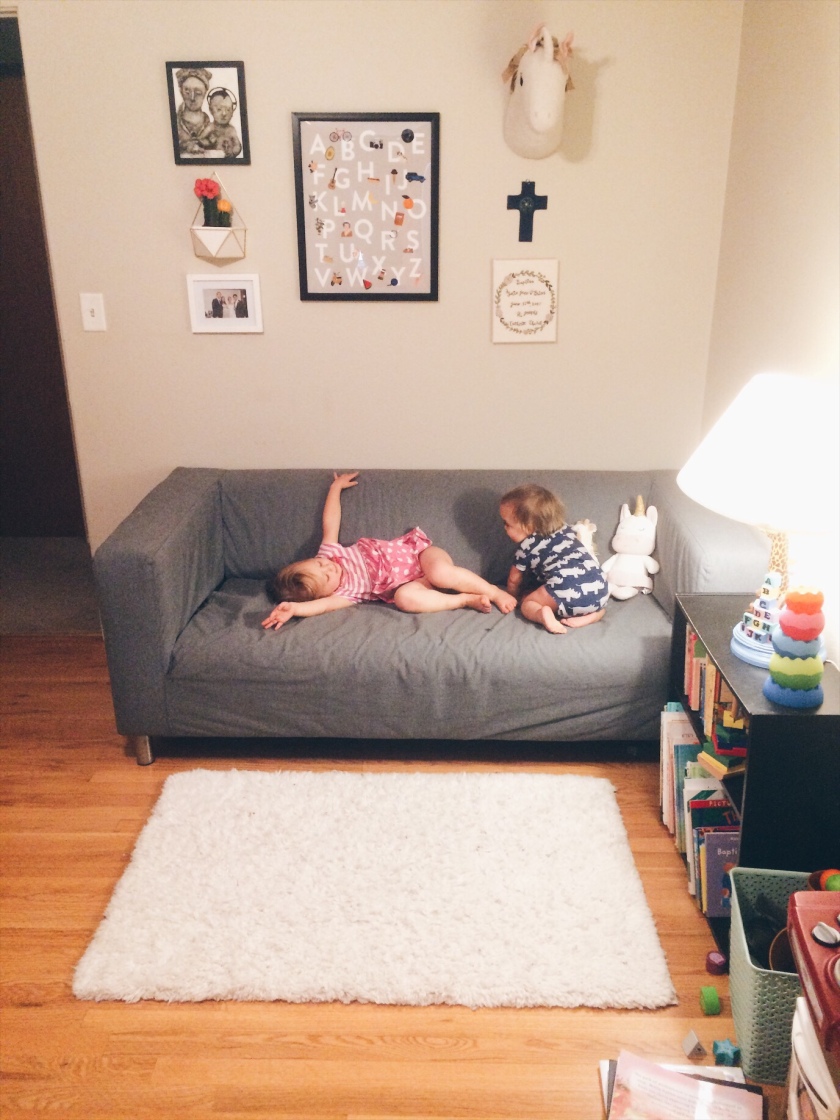 As far as the shared room is going … it’s not, really. Haha! They were together for a week, and it had its ups and downs. Bedtime was generally great. Zelie went down and didn’t wake up when we brought Evangeline in. But then Zelie started sleeping terribly from 2:30-5am for a few nights and that was not fun for anyone. Shared afternoon nap time, after two bad days of Zelie not being able to nap, got separated, with Zelie in a pack n play in the guest room. And then, when Chris and I went out for a date night and started planning the little retreat we’re taking over our anniversary, I realized it’s not fair to leave an unweaned baby with Grandma and Grandpa for two nights. So that took priority, and that means Zelie’s in the guest room until she can sleep through the night.

ANYWAY. All that to say, I’m hoping fall will bring me a new rhythm with some time to myself each week. And I am feeling how the extremity of the seasons here preps me for the next one, but I jump the gun a bit. So, working on that. I can look ahead and tell that the end of August will feel super busy, and by then I’ll probably wish I was back in this mellow July.